Saturday 9--Money for Nothing 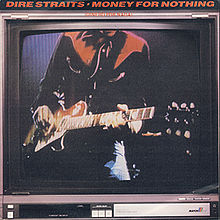 Gotta give it to Sam--I am a huge Dire Straits fan, and never tire of this song.  Fabulous choice for this week!!!

1) Sweatbands are prominent in this very 1980s video. What's the last thing you wore on your head?  I have this great sun hat from Sunday Afternoons called the Shade Goddess hat (don’t you love that), a breathable fabric, wide brim, with a little flap to cover my neck and an adjustable strap thing to keep it on my head.  With the crazy sun we have here in New Mexico, this thing gets a lot of use! 'Course, LOL, that is NOT me in the picture.  But the hat is identical :)


2) The lyrics are from the point of view of a man who delivers and installs appliances. What's the biggest purchase you've made lately? A new motor and squirrel cage assembly for our air conditioner.  Was it big in size or expense? Expense, definitely, about $700.  Not so big in size.  I had no clue what a squirrel cage was, but now I know.  It basically pushes the cold air into your house.

3) The delivery man of the song imagines the worst thing that happens to a musician is a blister on his little finger or thumb. Do you have any minor aches or pains bedeviling you as you answer these questions?  Something bit me on my foot between my big and second toes.  It itches.

4) The term "dire straits" describes a troubling situation that's difficult to extricate oneself from. When's the last time you found yourself in dire straits?  A few weeks ago.  Got through it.

5) There's a dinosaur called masiakasaurus knopfleri. It's a prehistoric, predatory lizard, and the paleontologists who discovered it were big Dire Straits fans, so they named it after lead singer/guitarist Mark Knopfler. Do you find dinosaurs fascinating, terrifying, or both?  Fascinating, especially the bird-like theories.

6) Prior to his music career, Knopfler was a junior reporter, covering the entertainment beat for the Yorkshire Evening Post. Do you believe you would make a better musician or journalist?  Definitely journalist.  I suck at music.

7) In 1985, when this song was popular, rib eye steak was $3.89/pound. Today it's more than twice that. Do you have any beef in your freezer right now?  Nope, ate the steak a couple of days ago.  But we're headed to the grocery store today, so there's a distinct possibility that some steak might find its way to the freezer.

8) In 1985, Michael Jordan won the NBA Rookie of the Year award after his first season with the Chicago Bulls. It was the beginning of a career that made him a hero and a household name. Who do you think today's young people look up to?  I have not a clue, not having any young people in my household, or general vicinity even.

9) Random question: Friends take you to dinner for your birthday. The menu you're handed doesn't have any prices on it. Do you try to estimate the costs and choose what you guess is the least expensive entree? Or do you figure that since your friends want you to have a good time, you should order whatever you want?   I order what I want.  If they were on a budget, I doubt they’d have brought me to a place that has no prices on the menu.  Or…if they did it by accident, I hope they’d say so.