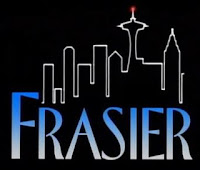 Not so much, I’ve seen it, and enjoyed the characters especially, but never really became a “fan”.

2) The show is about a radio advice show host, Dr. Frasier Krane. When you listen to the radio, do you tune in for talk or music?

I used to listen to the news every morning on the way to work, but it literally started depressing the hell out of me, and was NOT a good way to begin a workday.  I’ve replaced radio with podcasts.

Yesterday I had an egg scrambled with a handful of spinach.  Yum.

4) Peri Gilpin played Roz, Frasier's coworker at the radio station. The actress originally cast was Lisa Kudrow, but the show's producers didn't feel she was "right." Being released from Frasier gave her the opportunity to accept a bigger and better part: Phoebe on Friends. Can you think of a time when a setback was really a blessing in disguise?

Yep.  Took a job that I hated, then, as part of that job, interacted with a person who later was instrumental in me leaving that job and starting a whole new career path.

5) Dr. Krane shared his home with Martin, his retired dad. Martin's favorite chair was well-worn recliner, held together in parts with tape. Frasier tried to replace it by giving his father a brand-new, expensive leather chair as a gift. Martin wanted his old recliner back. Tell us about a present you either gave or received that wasn't a hit.

Several years ago, after my divorce, I bought a beautiful, heavy, sterling silver handmade bracelet at Indian Market in Santa Fe.  Handmade by a gentleman from Santo Domingo pueblo, it was stunning.  It meant a lot to me, it was the first thing I bought as an independent woman.  I gave this bracelet that meant a lot to me, to someone I cherish deeply.  I’ve never seen her wear it in any of the zillion photographs of her on Instagram.  Not once.  I wish she had said “you know, this isn’t really my style” or whatever, and given it back.  Which is petty, I know.  But, still, it’s the way I feel.

6) Kelsey Grammer played Dr. Krane on three different series (Cheers, Wings and Frasier) over 20 years. What job have you held the longest?

7) Before he found success on Cheers, Grammer played bit parts on the daytime dramas Ryan's World and Another World. Have you ever followed a soap opera?

Back in the day there was something called Ryan’s Hope.  I watched that one summer.

8) In addition to work in front of the camera, Grammer has done voice over work on commercials for Dr. Pepper and Cheerios. Are either of those products in your kitchen right now?

Nope, I don’t do cereal or soda.

9) Random question: You're invited to a party where dinner is served buffet style. There's spaghetti with tomato sauce, barbecue spare ribs and buffalo wings. When the evening is over, how likely are you to have a food stain on your clothes?

Not too likely, I'd avoid the spaghetti and ribs, and I’m pretty talented at wing eating.