1) Black is this week's signature color because Friday was "Black Friday," the day when retailers cut their prices and consumers flock to the stores. Did you score any "Black Friday" bargains?  We did go out, mainly to get lunch and a set of sheets.  I’m super picky about sheets, and pretty much only buy Fieldcrest Supima 700 thread count from Target.  They never go on sale, so I was pretty happy when I saw that they were 15% off with a 20% off coupon on my next visit.  Not much, but 15% is 15%.  And I’ll put that coupon to good use buying a Christmas present for someone.

2) Feasting and football are also popular Thanksgiving weekend pastimes. Do your Thursday-Sunday plans include pigging out or watching a game?  I literally never watch football, so that’s out.  Pigging out is not part of my lifestyle anymore.  I’m pretty proud of the 23# I’ve lost since August 1st.  I’m also proud of the change in our diets—more veggies and fruit and portion control.  My Thanksgiving dinner was about 3 oz of turkey, and a heaping tablespoon each of stuffing, green bean casserole, and cranberry sauce.  I was full, so we skipped the mini-pies that we bought and are saving them for another night.

3) At Thanksgiving dinners, Crazy Sam's homemade gravy is always a hit. (Probably because she's so generous with the cognac, which gives the gravy a nutty taste.) What was particularly delicious at your Thanksgiving table?  It was a tie between my husband’s cranberry sauce (literally cranberries cooked in orange juice till they pop—yum) and his signature stuffing (stuffing, Jimmy Dean sausage, and mozzarella cheese, moistened with pan drippings).

4) Among the biggest the Black Friday advertisers are Target, Kohl's, Macy's and Best Buy. If you could have a $100 gift card to any one of those stores, which would you choose?  Target in a heartbeat.  I love their housewares section, so many cool decorating items.

5) This week's song, "Baby's in Black," is about a girl who wears black because she's in mourning. Do you find that the color you're wearing reflects your mood?  I’m feeling cozy in my red plaid flannel PJs that my Mom got me for Christmas last year.

6) The woman who inspired this song, Astrid Kirchherr, has been friends with Paul McCartney since he and his bandmates (John Lennon, George Harrison, Stu Sutcliffe and Pete Best) met her in Hamburg back in 1960. Tell us what you believe are the components of a strong, lasting friendship. Giving each other space and respect to be who they are without judging.

7) In the early days of the Beatles, Paul McCartney and John Lennon began writing a play but abandoned it. Do you have a novel, painting, play, song or poem that you're going to finish "someday?"  I’m the most non-creative person of the face of the planet, so this one is a no.

8) When he was 16, George Harrison dreamed of moving to Canada, Australia or Malta. In just a few years, he would visit all those places with Beatles and eventually decided there was no place like home and stayed in England (though he did also maintain a home in Hawaii). Have you ever thought about moving to another country? If so, where?  I’ve always dreamed of living in England.  I’d love to live in the North or in Cornwall.  Alternatively, and closer, I’d pick Canada, specifically Vancouver.

Happy Thanksgiving to my few readers--I'm thankful for those who read me, and for the blogs that you are much better at keeping up with than I.  When I actually have a few minutes, and the energy to pick up this computer for something other than school, I greedily catch up on everything going on in places other than New Mexico.  I'm grateful for all of you :)

So, what's been going on (this will probably be a long one, so bail if you don't have the time or the interest) 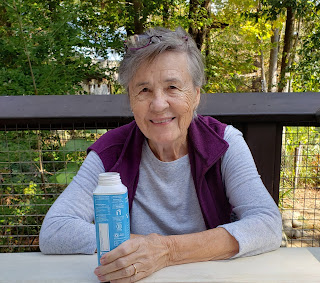 I went home to South Carolina a few weeks ago and spent several days with my Mom.  It still weirds me out a little (in a sad way) to be there and not see my Dad.  It's like there's an echo or something in the house.  An empty spot.  His recliner is still there--the one he passed away in.  No one ever sits in it, although I tried it out when my Mom wasn't looking.  My Dad was 6'4", and the recliner is the "big and tall" version, so I felt like a tiny little child sitting there.  I wish she'd move it into another room or something, because it keeps catching my eye when we are in the living room hanging out.  But, it's her grief, and her house, and I will be OK.  Other than that, we had a great time just spending time with each other.  My favorite day was a trip to Columbia, spending time at the zoo and shopping at Mast General Store.  Here's a lovely picture of my Mom... 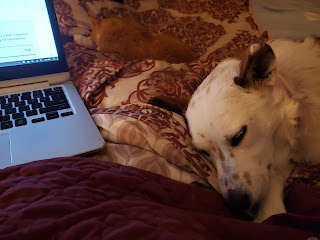 I'm dutifully slogging away at my MBA.  Maddie enjoys helping me study, lol.  I confess to not be as interested as I was in the beginning, but will just keep on keeping on.  I don't know why I'm doing this to myself, other than a need to be constantly busy with things that don't matter much.  It's not like I plan on running the hospital or anything.

I have been having terrible, terrible anxiety attacks at night.  To the point that I sought out a therapist to try and work it out.  She sucked.  Literally talked about herself and her problems for 35 of the 40 minutes I was paying for.  I had to interrupt to get a word in edgewise, then back to her bullshit.  I tried 3 appointments, all the same.  I told her the last time that I wouldn't be back, and she might want to think about letting the clients talk.  So that was a bust.  And that was after waiting 6 weeks to get an appointment, and a week long search.  Mental health care in New Mexico (like the rest of the country, I imagine) sucks, so it's back to searching for me.

Work was going along swimmingly, and then our boss (who I loved) was politely demoted and told she needed to go to one of the other hospitals in the system.  I've been around long enough to know that this shit happens all the time (office politics, ugggg), but it still was painful.  She left on a Friday and magically,  poof!, the new boss appeared on Monday.  She's kind of like a snake, all dead eyes, no blinking, and super flat affect.  She's pretty much ignoring the five of us in utilization review and is all over the case managers about length of stay, so ... that's good?  I feel a little lost.  I'm sure everything will work out in the end, and am super glad the CFO and the AVP really like me and are happy with my work.

Maddie continues to be a great joy in our lives.  Speaking of gratitude--I'm so grateful for her.  She saved us literally, after my Dad passed away, and Ginger had to unexpectedly be put to sleep a day later.  Maddie has had a tough life--she was found by animal control in a culvert with 8 puppies, starving.  Due to overcrowding at that public shelter, she was slated to be euthanized.  In swooped Watermelon Mountain Ranch, the largest no-kill shelter in New Mexico, and they made a trip to Carlsbad and took all the animals in.  One of her front legs was broken at some time, and healed poorly, so it's crooked.  She's missing a toe on the other foot.  She is terribly noise averse, terrified of thunder, gunshots, yelling, etc.  We've worked with her, took her to training classes, and she's seen a behavioral vet.  She's doing SO GOOD!!!  She saved us, and we saved her.  So gratitude all around.  So here's another obligatory Maddie picture: 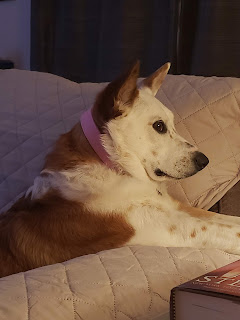 Well, that was a hella info-dump.  Ya'll know this long-ass post was just as much about me talking to myself as it was about telling you what's going on, right?

Happy Thanksgiving again to my blog friends out there--may your day be full of joy! 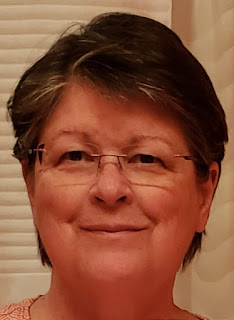