1. What is your favorite spooky song

2. What do you want etched on your tombstone?

3. Who is your favorite horror movie villain.

Maxim was a dick.

4. Have you ever seen a ghost?

Don’t believe in them, so no.

5. Do you prefer gore, thrillers or supernatural movies?

6. What is your favorite scary book?

I’ll go with short story on this one, cuz, just cuz.  The Lottery by Shirley Jackson is just… perfectly scary.

7. Have you ever had a tarot card reading?  Was it accurate? Nope. I looked into this back in the day, and I just never got it. Mea Culpa.

8. Are you superstitious?  This is interesting.  When I worked at the bedside, I had this massive OCD superstition that if I wrote in black ink, my patient would die.   Yep, stupid, I know, but it was what it was.  To this day, on the other hand, I refuse to write in black (yay, no actual writing).  OCD is a very …. Uncomfortable disorder.

9. Have you ever used a voodoo doll?  Seriously?  No!  My brother used to try and get me to go to the Voodoo Museum every time we went to New Orleans as a kids.  I refused.  He loves that shit.

10. Have you ever participated in a seance? Don’t believe in this stuff, so no.

11. Have you ever heard voices when no one was around except you?  Nope.

12. What is your favorite Halloween candy?  I want to like candy corn, but the first bite grosses me out so no, don’t like it.

13. What was your most memorable Halloween costume? My first year as an RN I wanted to be all political and shit, so I taped fake dollar bills all over my scrubs and went as “healthcare in America”.  Nobody got it.  So, there was that.

14. Do you like going through haunted houses (not real ones)? Fuck no, that shit is too scary.

15. If someone dared you to spend the night in a haunted house (a real one) would you do it?  Dude, there is no such thing is a real haunted house, so whatever.  Never happening. 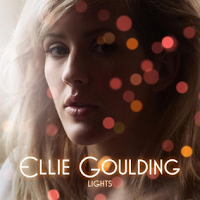 1) This song was inspired by a young Ellie Goulding's fear of the dark. What scared you when you were a kid?

My parents yelling at each other.  To this day, raised voices trigger a bolt of anxiety.

2) She thinks back to the room where her brother and sister slept and she felt safe. Did you share a room when you were growing up?

Not that I recall.  We always had 3 bedroom houses.

3) Ellie Goulding grew up in public housing and worked her way through the University of Kent in Canterbury. Back in those days, her favorite job was theater usher because it offered her the perk of seeing plays for free. What's the most recent "freebie" you scored? (This includes a buy one/get one deal, extra points on your credit card, etc.)

A nifty covered casserole dish from Albertsons Market where we shop.  It “cost” 80 points and had a value of $50, which is inflated as hell, because I would probably give maybe 15 for it if I had bought it.  Either way, it’s a nice little piece and matches our other white dishes.

4) Even though today she is an international music star, Ellie still lives modestly. She describes herself as "still in university mode," and limits herself to $10/day for lunch. Where do you economize?

We have a free-standing freezer and a vacuum sealer.  When we find meat on sale, we buy double or triple, split it up into dinner portions, vacuum seal, and pop into the freezer.  Whole chickens were 70 cents a pound the other day, we bought 4 for less than 20$, left two whole, and cut 2 up.   That’s 8 meals for under 20 bucks, so basically around $3.00 a meal, counting the starch and veg.  For both of us.  Other than that, I suck at economizing, lol.

5) Ellie has proclaimed herself "a cat lady" and often posts pictures of her cats to her Instagram account. What's the most recent photo you took? 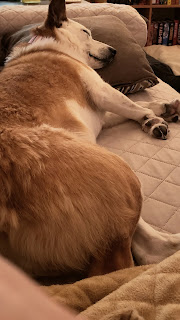 6) Ellie appeared on Sesame Street. She, Elmo and Abby thanked clouds for raindrops, lakes, and the water we drink. Would you be thankful for a little rain this weekend?

I live in the high desert of New Mexico.  There is NEVER a time when I am not thankful for rain.  I remember one time in Florida, it rained 20 inches over a 5 day period.  We get about 9 inches A YEAR.  It’s supposed to get cold and rainy on Sunday, maybe even an early snow.  Yay!

7) In 2011, the year "Lights" was a hit, Prince William married Kate Middleton. Ellie not only attended the wedding, she sang Elton John's "Your Song" for the couple's first dance. Tell us a song that reminds you of a romance in your life.

Don’t know if it has a name, but it’s a little piece that hubs plays for me on his acoustic guitar.  I think he wrote it the year we met.  Always makes me smile.

8) Also in 2011, AT&T abandoned their attempt to buy T-Mobile. Which company is your cell phone carrier? Are you happy with them?

We’ve been with Verizon since the dawn of cell phones.  I haven’t switched, so I must be happy.

9) Random question: What recent experience made you feel old?

Watching a video of my grandson taking his first steps.  Where did the time go?  It feels like just the other day that I was watching my daughter do just the same thing.

Today's "Madventure".  Maddie, hubs and I headed up NM Highway 4--one of my favorite drives ever in the history of ever, up the Jemez Canyon from San Ysidro to Jemez Springs.  We had frito pie christmas-style (both red and green chile) for lunch.  Here's some shots. 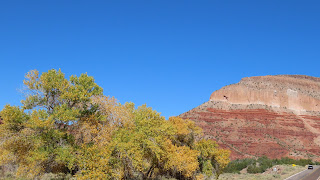 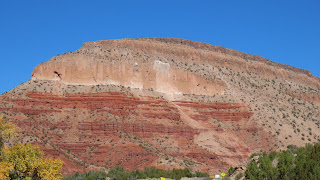 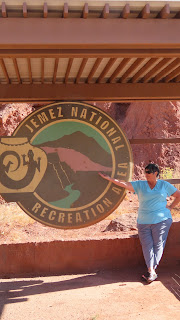 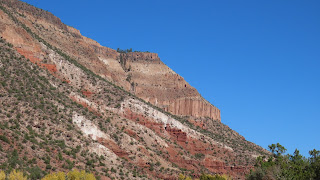 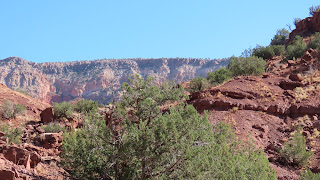 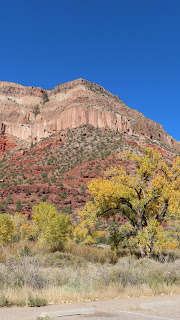 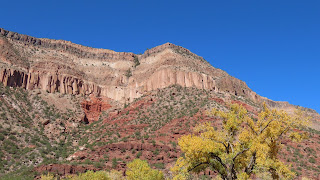 I can't believe I haven't blogged since August.  Well, actually, I can.  I am slowly crawling my way out of the worst bout of depression I've had in YEARS.  After the joy of getting the house done, and hearing Mom's plans, it just smacked me down like a bitch.  That's what depression and anxiety are--a bitch.  I finally made the decision to fire the shrink I've never liked, who kept insisting I need drugs that I don't.  Found a lovely psychiatric nurse practitioner who said "I don't want to know what other providers think you have, let's start from scratch".  Halle-fucking-lujah!  Depression, anxiety,  OCD.  Drugs have been changed and after 2 months of this, I am finally starting to feel normal-ish.  At least I'm not crying 4 times a day and obsessing over the grout lines in my floor constantly.  Or crying and scrubbing the grout lines in my floor simultaneously.  Not a pretty picture, I know.

Anyhow, I did manage to keep working through all of that, which is a miracle.  I also managed to get another class completed.  Type A's just keep rolling along, I suppose.

I am tired, though, and desperately need a vacation--I have been orienting people at work for what seems like forever and I'm sick of it.  I'm basically being voluntold to be the team lead, without the title or the pay, which boss lady swears is coming eventually.  Yeah, ain't holding my breath on that one.

Next weekend we're heading up to Santa Fe for a socially distanced, masked-up mini-cay before I go to SC to pack and move Mom out here.  I'll be off work for the most of November and I can't WAIT.

I'm a bit freaked out about the whole flying thing.  Boss lady procured me an N95 mask from the hospital, which is much appreciated.  I've got a stash of KN95s as well.  I'm so fucking sick of COVID, like the rest of the world.

Today, we're going to drive up the Jemez, and hopefully get some great pictures.  The cottonwoods are blazing gold right now--we'll get some takeout and go to our little favorite park and have lunch.  Picnics have been our savior.  We love to eat out, but I am not setting foot on a patio or in a restaurant until there's a vaccine.  Just ain't happening.  Every weekend we get takeout and have made it fun by trying new places and finding new parks.  I am amazed at just how many parks there are in the ABQ metro area.  We've got our favorites, though.  I love the one in the Bosque (that's the cottonwood forest that runs along the Rio Grande), and the little pocket park at the Veteran's Memorial (shade and a fountain!)

Maddie joins us on these adventures.  We call them "Madventures" 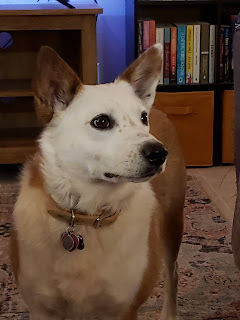 We started a walking program in September.  I think it's one of the things that started to help with the depression too.  Anyhow, we use an app called WoofTrax that tracks our walks and donates to our local shelter.  We are up to about 2 miles five days a week.  Maddie has lost 10 lbs!  She's no longer a potato, more like a tater tot.  The vet was thrilled at her annual check up.  I have not lost a jot of weight, but feel much better.  As does hubs.  So there's that.

I'm doing a MUCH better job at self-care working remotely this time around than I did the last time.  I take breaks, and use my lunch hour for the walk.  I still get up and start work at a ridiculous hour, but no longer feel guilty about doing stuff like the walk.  The work gets done.  Fortunately, my job really isn't dependent on me being "on" for a particular set of hours, which is nice.  I like working at 430 in the morning, no emails and pings to distract me.

To all my readers (here's looking at you, Kwiz), have a fab weekend.  Maybe I'll drop back in for a meme....