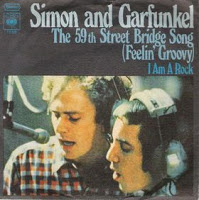 1) The bridge that inspired this song is The Queensboro Bridge in New York City. Are you near a bridge right now as you answer these 9 questions?

Well, sorta.  I live in a smallish city on the northwest side of the Albuquerque Metro area.  Albuquerque is on both sides of the Rio Grande river, and in order to get lots of places, you have to cross a bridge. Which can be a pain, because there are a limited amount of them.  Those are always the most crowded roads in the morning and afternoon (the ones that cross the river).  Good thing I’m working from home now.  I hated that commute.  This is one of my favorite bridges….it’s the Montano  crossing.

2) Paul Simon says he "loathes" this song and only performs it because fans want to hear it. What's your favorite Paul Simon song?

Pretty much everything on Graceland—it’s one of my favorite albums, period.  If I had to pick, I’d say Diamonds on the Soles of Her Shoes.  This clip is from his concert in Hyde Park.

3) "Groovy" is such a 1960s word. What common word/phrase from 2020 do you predict will sound just as silly and quaint some day?

4) Paul is a lifelong Yankees fan and was thrilled to meet his all-time idol, Joe DiMaggio. Mr. DiMaggio was, at first, less than thrilled to meet Paul because he thought the song "Mrs. Robinson" made fun of him. Once Simon convinced him it was an homage, the men got along fine. Do you have a celebrity encounter to tell us about?

5) Art Garfunkel was the other half of Simon and Garfunkel. Art and Paul met in sixth grade, when were both in a school production of Alice in Wonderland. Tell us about one of your school theatrical appearances.

I hated drama, and being on stage.  I’m sure I was in some play at some time, but I don’t remember it.

6) "Artie" used to love needling Paul about his height -- or lack thereof. He maintained he was trying to be funny, but Paul thought is was mean and says the constant digs hurt. Is there anyone in your life who similarly enjoys teasing?

My late Father was a bully.  That’s what teasing is—just another kind of bullying.  He loved to needle me about my politics (I’m a liberal, he was a died in the wool Trumper), the way I spoke (too loud he said, which was the pot surely calling the kettle black), and my weight (coming from a man who was overweight all his life).  It hurt.  A lot.

Until I figured out that I could just stop playing his silly games.  That was the most freeing experience, and it allowed me to learn who he was and how he got that way—I just stopped engaging, and it took the wind right out of his sails.  Mind you, I endured 54 years of this before I figured it out.

Just after Trump was elected, I went home to visit.  I went into the room I always used, and he had very carefully laid out a MAGA hat and T-shirt on my bed.  I picked them up, went and found him, and very calmly told him that I wasn’t putting up with this shit anymore and that politics was off the table for my visit.  I told him if he couldn’t deal with that, he could carry my ass right back to the airport.  He apologized and we had a lovely visit.  I won’t say he didn’t try to poke at me, but everytime, I just got up and walked away.

Wish I had figured that out a lot earlier in my life.

7) Paul told NPR that his impulse to write new music has always come "in bursts." He'll go years without composing, and then he'll write every day for months. Do you often feel creative?

8) In 1966, when this song was popular, First Daughter Luci Johnson married Patrick Nugent. Their reception was held at the East Room of the White House. The couple had an 8 ft. tall wedding cake and when the bride threw her bouquet, it was caught by her sister, Lynda. Sure enough, Lynda married a year later. Tell us about a wedding you attended (or your own).

We got married at the county courthouse on a rainy February day and went to Universal in Orlando for the weekend.  We stayed in a crappy hotel, because the nice one we wanted to stay in was completely booked.  We had unwittingly chosen the weekend of the Daytona 500 to get married.  For years after we would put off our anniversary night out, because you literally couldn’t get a table anywhere.  We don’t have that problem now that we’ve left that part of Florida, yay!!