Attack of the Killer Garden Pests 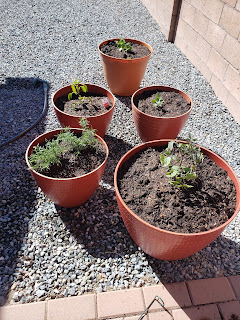 We have been container gardening every year since we re-did the back yard and added the patio.  So about 4 years now.  We've never had the first problem with pests, but this year, man, our garden was a total bust.  We planted a midnight snack cherry tomato (same as last year), rosemary, sage, a sweet heat pepper, and yellow squash.

The only thing surviving and healthy is.... you guessed it.... the un-killable rosemary.

It's so odd, because we've never had to use any sort of bug spray or anything of that sort.  Stuff just grew.  We've had a really good monsoon season this year, which means more rain, so maybe that brought the bugs--I don't know.

The first thing to get eaten was the squash.  We got 2 whole squashes, and the bugs destroyed the rest in literally a day.  It was like a herd of bugs.

We harvested 26 peppers, a bunch of sage and rosemary, and lots of tomatoes before the caterpillars came.  But we got these tomato hornworms and that was that. 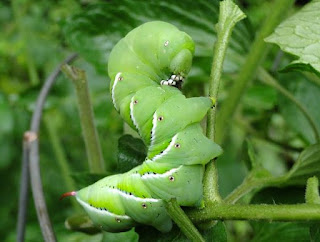 They literally killed the pepper plant overnight.  There were two of them.  Ugly little beasts.  My cousin tells me they grow into a very large moth called a sphinx or hummingbird moth which is a beneficial night pollinator.  Well good for them.  They are magically gone today (maybe hubs sent them to their deaths...he was SO pissed).

The tomatoes are in too small a pot, I think.  They just look pitiful.

I think I need to do some serious reading and thinking about the whole gardening project.  Prior to the evil hornworm incident, we were considering putting in raised beds next year.

Email ThisBlogThis!Share to TwitterShare to FacebookShare to Pinterest
Labels: House