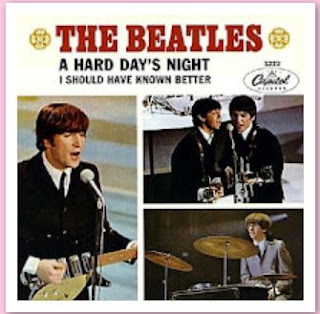 1) John Lennon sings that he's been working like a dog. What's the hardest job you've ever had? What made it so difficult?

Being a Director of Nursing of a skilled nursing facility/long term care center was the hardest job I’ve ever had.  Being responsible for the care of 120 elders was exhausting.  Making sure they got good care, managing 100+ employees, with all that entails, being permanently on call 24/7.  It was rewarding, but incredibly stressful.  Never again.

2) Despite the hard work, he likes his life and asks, "So why on earth should I moan?" What's the last thing you complained about? Who were you talking to?

Our homeowners association (HOA) recently raised our monthly dues….by $4.00.  Our dues are incredibly reasonable—now $44.00 a month, which provides us with landscaping and irrigation of the common areas as well as our front yards.  Considering I have 2 trees and 8 large bushes in my front yard, and a small lawn, (I live on a corner), IN THE DESERT, I consider this quite a bargain.  I attended the last HOA meeting, and out of the 3600 houses in this neighborhood, only 20 people showed up to the meeting.  So, last night, in our neighborhood FB group, the usual bunch of trolls bitched and moaned about the HOA “not doing anything” and the raise in dues, and it really pissed me off.  So, I pointed out that change doesn’t happen in a vacuum—if they want to complain, why not come to a meeting and do it in the appropriate forum?  I got lots of likes, so I guess it was a “good” complaint.

3) John was raised by his Aunt Mimi. She meant well when she told the teen-aged John, "The guitar's all right, but you'll never make a living out of it." What's the worst advice you've ever received?

4) This week's song was cowritten and also sung with Paul McCartney. Paul's father was more supportive of the lads' show business aspirations than Aunt Mimi was, but he still worried that his son wouldn't be able fully support himself as a musician. To please his dad, 17-year-old Paul worked over the Christmas holiday season as the "second man" on a delivery truck. Paul would be the one to hop off the truck and drop off the packages while the driver could keep the motor running and the heat on. Where was the last package you received from? (Extra points if you share what was in it.)

Wayfair.  I had ordered a side table and chair for my bedroom, and thought better of it, and cancelled the order (yay, me, for being fiscally responsible).  The table, though, had already been processed, so it came.  And day before yesterday, it went back.  I’ll complete that project some other time.

5) After Christmas was over, Dad insisted Paul get a full-time, year-around job. He ended up at a factory, winding heavy coils to be used in electric motors. He hated the work but enjoyed the lunch hours, eating jam sandwiches and, weather permitting, kicking a soccer ball around the yard with his coworkers. What's for lunch at your house today?

We always go out to lunch on Saturdays, so I have no idea.  There’s a Mexican place we’ve been wanting to try, and I’ve been craving birria tacos, which is food truck fare—just don’t know yet.  I'm really leaning towards the tacos.

6) In early March 1961, the Beatles accepted a booking to play lunch hour gigs at Liverpool's Cavern Club, and so February 28, after less than two full months, Paul said goodbye to factory work. What's the shortest you ever stayed at a job?

I took a job once as a staff educator at a nursing home.  Unbeknownst to me, this particular nursing home had a high population of patients with severe mental illnesses—schizophrenia and the like.  Frankly, it was a dump.  My second day, a patient threw me into a wall, face-first.  I walked out, and never went back.  I am not, nor have I ever been, a psych nurse.

7) Enough about these Brits! Labor Day was introduced to celebrate the achievements of the American worker. How many different employers have you had?

Wow.  A lot.  I’ve moved around my whole life, and am an inveterate job-hopper.

8) This weekend may offer a golden opportunity for napping and sleeping in. Do you snore?

According to hubs, I do, but “it’s cute”.  Not sure what that means, but that’s what he said.

9) Labor Day traditionally marks the beginning of the new school year. When she was a kid, Samantha was crazy for her brand new box of 96 Crayola Crayons. It even had a sharpener in the back! What do you remember about preparing to go back to school? If you're an educator, let us know how you get the classroom ready for the kids. 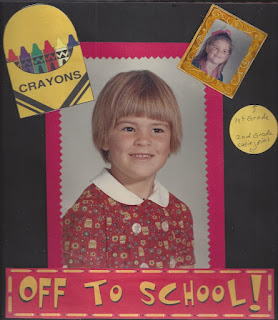 When I was in elementary school, my mom and I would go on a trip to the fabric store in the next town over.  She would let me pick out 5 patterns, and the fabric to go with them.  Then she’d sew me five new outfits for school.  Usually skort type things (we called them culottes), because Mississippi is hotter than hell most of the year, but we weren’t allowed to wear shorts, and I hated dresses.  On the same trip, we’d go to Buster Brown and I’d get a new pair of shoes also.  Then we’d go to Sears and buy new underthings, jeans (we weren’t allowed to wear them to school in Mississippi, though), and socks.  And after all that, we would have lunch somewhere.  It was OUR day.  She did the same thing with my brother, but on a different day.  It was always fun.

Here's a blast from the past from a scrapbook that my mother made for me.  The small picture is 1st grade, and the larger one 2nd grade.

I wanted to take a minute to thank "Sam" for all the great questions.  The research she puts in on Saturday 9 is truly phenomenal, and I love the music theme.