Saturday 9--I Left My Heart in San Francisco 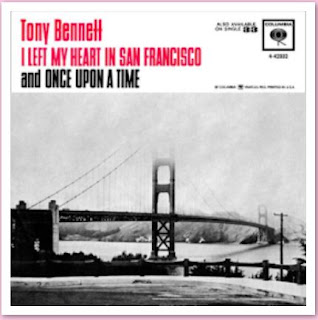 1) This song is a valentine to the city of San Francisco. Songwriters George Cory and Douglas Cross moved to New York to find fame and fortune and found themselves homesick for the city by the bay. Have you ever been homesick? Or, in the parlance of the song, where have you left your heart?

My heart got left here in New Mexico when I moved back to Florida in 2003.  It took me almost 10 years, but I got back here, to the home of my heart, and never plan to leave.

2) Cory and Cross were buddies with Ralph Sharon, a piano player who often worked with Tony Bennett. Ralph brought the song to Tony and the results were very happy for all involved. Have you more recently done, or been on the receiving end of, a favor?

My mom makes the best quick pickles.  She brought me a jar the other day.

3) The lyrics compare San Francisco to Paris, Rome and Manhattan. Have you visited those cities?

I’ve been to Manhattan and San Francisco, but not to Rome.  I’m not a city girl, so I find them pretty overwhelming.  Albuquerque’s a city, but a small one.  It’s manageable.

4) This week's artist, Tony Bennett, sang professionally for the last time in August. He retired after performing at Radio City Music Hall with Lady Gaga. Their musical collaboration dates back to when they both performed at President Obama's inauguration. Though 60 years apart in age, they became fast friends based on their shared love of jazz. Do you find that most of your friends are older than you, younger than you, or within 5 years of you?

Don’t really have a clutch of friends.  Work friends are usually around my age.  Hubs is 12 years younger.  A friend I recently connected with after some time is quite a bit younger—my daughter’s age, actually.

5) While Lady Gaga grew up listening to Tony Bennett, as a young man Tony recalled listening to Bing Crosby, Judy Garland and Joe Venuti. Which singers did you enjoy during your teen years?

6) While he's famous for singing about San Francisco, Tony is a proud son of New York. Born in Queens, he chose to end his career at Radio City Music Hall and was excited to perform "New York State of Mind" with Billy Joel at Shea Stadium in 2008. Do you have a favorite Billy Joel song?

I’m not really a Billy Joel fan, so no.

7) Tony Bennett and Frank Sinatra may have been competitors but they shared mutual admiration. Sinatra called Bennett "the best singer in the business," and Bennett did a Sinatra homage album called Perfectly Frank. Think of people you have worked with over the years. Tell us about someone who has impressed you, and why.

One of the people that inspired me to get into nursing was a ER RN named Kathy.  She worked weekends in the small ER where I was a unit clerk.  I was so impressed with her calm, cool, and collected care of people.  I mean, nothing rattled this woman.  We got to be fast friends.  She passed away suddenly my final year of nursing school at age 35 from a fatal arrhythmia—she didn’t even know she had a heart problem.  At her wake, her husband gave me her Littman stethoscope.   I still have it and used it every working day of my life until I left the bedside.  I’ve often thought about having it framed somehow—seems it would be more fitting than sitting in a drawer.

8) The 1970s were a difficult period for Tony. During the days of disco and Studio 54, he said singing new songs made him feel like his mother, a talented seamstress, when she was forced to make a cheap dress. OK, so Tony doesn't like disco! Is there a genre of music you just don't care for?

Prog rock is not my thing.  Nor is mainstream country.  Or opera.  I have terrible tinnitus, so while I don’t mind metal, it amps the cicadas that live in my head up to 11.

9) Random question: Imagine you're the passenger in a long car ride. Are you more likely to be calm or fidgety?

I love driving.  I’m calm and relaxed.  Hubs is the anxious one.