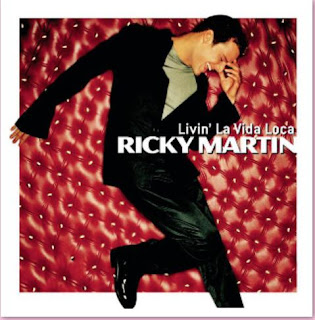 1) Ricky Martin sings that he and the girl dance in the rain. Do you feel like dancing this morning?

Well maybe a little shimmy.  After a rough couple of days, I finally got some sleep last night.  I’ve been trying an app Kwizgiver recommended (Headspace) and meditation before bed.  I like their “sleepcasts” too.  I drift right off.  Thanks, Kwiz!

2) The lyrics tell us the girl prefers champagne. When did you last enjoy a glass of the bubbly?

3) When Ricky first heard "Livin' La Vida Loca," he imagined the subject of the song was a "Bond girl," the glamorous love interest of James Bond in the movies. Since 1962, there have been more than 20 Bond films. Have you seen any/many of them? Do you have a favorite Bond?

I love the classics with Sean Connery.  And the first Daniel Craig one was pretty great.  The guys in the middle, not so much.

4) Ricky tells interviewers that when he was very young, he'd sing in the family kitchen, pretending a wooden spoon was his microphone. Crazy Sam admits to lip synching into a black Magic Marker. When you gave imaginary concerts, what did you use as a microphone?

I don’t recall ever doing this.  Not much of a singer.

5) Ricky began working at the tender age of 9, performing in commercials. How old were you when you received your first paycheck?

6) Ricky does yoga to stay in shape. Have you ever tried yoga?

A few times.  My body is not built for yoga, at least the kind I tried.  I would love to take a class with a larger yoga instructor who knew how to assist older, fatter beginners.  I’ve seen videos, but it’s just not the same, when you know nothing about yoga.  I’ve looked around, but haven’t seen anything that isn’t an hour drive for me that fits the bill.

7) Ricky is of primarily Spanish descent, with a little French mixed in. When you think of French cuisine, what comes to mind?

Julia Child’s and her boeuf bourguignon.  I recently did a re-watch of Julie and Julia, it’s a fun movie, one of my favorites, and Meryl Streep and Stanley Tucci are just ... amazing.

8) Ricky once had his own restaurant, Casa Salsa, in Miami Beach. Have you ever worked in food service?

Only the previously mentioned ice cream shop, which lasted a couple of months.  We never had any customers, and they closed.  The location was terrible.  Other than that, nope.

9) Random question: What is your best quality?

Tenacity, I guess.  I hate giving up.