Saturday 9--She's Not There 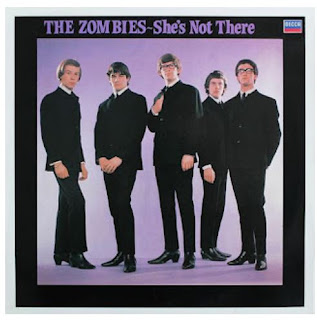 1) This song is about a young man who is upset his friends didn't warn him against a girl who turned out to be untrue. Have you ever involved yourself in a friend's love life with advice about a relationship?

Not particularly.  I never thought that it was my place to speak on other people’s relationships.

2) According to legend, this song was inspired by a girl who called off her wedding just weeks before the ceremony, humiliating her fiance and breaking his heart. Do you know anyone who was similarly left at the altar?

Other than TV characters (poor Edith in Downton Abbey comes to mind), no.

3) The Zombies first played together as a bar band, popular at an English pub called The Blacksmiths Arms. What's the name of your favorite local restaurant or bar?

If I think about the place we go to the most, it’s a pop-up, twice-weekly dumpling house in Albuquerque, called, fittingly, “Pop-Up Dumpling House”.  It’s a good 45-50 minutes from our house, so not easy to get to, but very much worth the drive.  We don’t go to bars.

4) The Zombies broke up after a few years but put all acrimony behind them in 2019 when they reunited to perform at their induction into The Rock and Roll Hall of Fame in Cleveland. Have you ever been to Ohio?

5) While 1964 is remembered as the first year of the British Invasion, when rock bands from the UK dominated the airwaves, it was also the year Barbra Streisand became a major star, featured on the covers of both Time and Life. Are there any magazines in your home right now? If so, who is on the cover?

6) Also in 1964, actress Ena Hartman became one of the first African American actresses to have a speaking part on the country's top TV Western, Bonanza. Is your TV on right now, as you answer these 9 questions?

Yep, I’m doing a rewatch of The Tudors on Showtime.  It does not hold up, for the most part.  Some of the performances are brilliant, but the history sucks.  I recall thinking that upon the first watch, but I was so fascinated that such a story had come to the screen…well.  I don’t know if I will ever re-watch this one.  And all the gratuitous sex is a little uncomfortable.

7) The "It's a Small World" ride was introduced at the 1964 New York World's Fair. It's now at Disneyland, Disney World, Disneyland Paris and Disneyland Hong Kong. Have you ever taken one of these Small World rides?

I think so, the last time I spent any length of time with my daughter, when she was 6.  We went to Disney with my parents and brother and his family, and I think we took this ride.  Sad that it’s been that long.

8) General Douglas MacArthur's memoir was published shortly before his death in 1964. It became a best seller. Was the last book you finished fiction or non-fiction?

Station Eleven: A Novel by Emily St. John Mandel.  Try as I might, I could not finish Ammonite by Nicola Griffith, even though I love one of her later books.

9) Random question: You find yourself calling the local garage often to get updates on your car repair. Every time you call, the person who answers the phone is abrupt to the point of rude. Do you: (1) let the person know you'd appreciate a change in tone; (2) ignore it; (3) complain to the boss?

These days, I’d let her know in a nice, kind way, that I needed more than she had to give me.  If she continued to be a bitch, I’d let her boss have it.  Back in the day, I wouldn’t have started at nice.  I would have just gone off at her, which gets nothing done, I’ve learned.