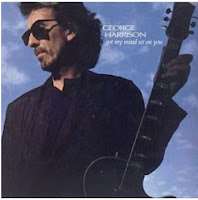 1) George Harrison sings that he requires money, patience and time. Which of those three do you wish for most this morning?

Money.  Off to Macy’s with Mom.  It would be nice to have some cash to spend, but I’m going to hold myself back.

2) This was long one of George's favorite songs. He first heard it back in September, 1963 -- months before the Beatles became an international phenomenon -- when he visited his sister in Benton, IL. Is there a song that reminds you of a trip you took?

Break Stuff, by Limp Bizkit.  (Warning: Explicit Lyrics).  I can’t believe I ever OWNED, much less listened to this garbage, but this song sticks in my head.  I played it over and over again on my long trip up through Canada from Santa Fe, NM to get the rest of my stuff from my house in Alaska.  The divorce was finished and I was so.very.angry, and 12 years of my life and a relationship with my daughter was out the window.  I felt broken, and wanted to break stuff, so I guess it was the perfect song.

3) For years, George thought his birthday was February 25. When he was 17, he saw his birth certificate and learned he was really born on the 24th. His mother explained that he was born just before midnight on the 24th and she didn't get to hold him until early morning on the 25th, so she considered the 25th as his birthday. Do you know any interesting stories about the day you were born?

Not really.  The only interesting bit is that I was born two days after my cousin, and our Moms shared a room in the same hospital.

4) When George was just 14, he met Paul McCartney on a bus en route to school. Tell us about a time when you met someone who ended up changing your life.

Meeting my ex-husband definitely changed my life.  He was a person who loved to travel and thought nothing of car camping his way across the country.  I probably would still be in Virginia, and would have never seen, lived, or done all the neat stuff I have if it weren’t for him.  The first 6 years of our marriage were really good ones, and I’ll always be grateful to him for showing me some really beautiful places in this country.

5) Then 17, John Lennon was not interested in letting George perform with his band. He dismissed George as too young. Paul insisted George get a chance and the rest, as they say, is history. Tell us about someone who stood up for you and helped you succeed.

I have a friend in Albuquerque, also a nurse.  He stood up for me and helped me get my first job away from the bedside, in case management.  He was my mentor, and I’m so glad we’re still in touch.  We’ve moved on to different areas, and companies, but we still stay in touch.  He’s a great guy.

6) In the 1970s, George took up gardening. He said that clearing away weeds and overgrowth helped him clear his head, and he was very proud of his jasmine flowers. What's your hobby? Why do you enjoy it?

Right now, blogging and cooking.  And I’m enjoying both very much.  Once the new side gig starts on Monday, I hope I can manage to continue to do both.

7) He also enjoyed playing ukulele and encouraged others to do the same. George often gave ukuleles as birthday and Christmas gifts. What's the last gift you received?

Cookbooks.  Julia Child from my Mom, and a Soup and Stews cookbook from hubs.

8) At the Academy Awards in spring 1976, another George was in the news. George Burns won an Oscar for his performance in The Sunshine Boys. Who was in the last movie you watched?

Simu Liu, Awkwafina, and Michelle Yeoh in Shang-Chi and the Legend of the Ten Rings

9) What's the last thing you dropped? Did it break?

A Christmas ornament I bought in Boston.  It did.  I managed to collect all the pieces and am going to try to superglue it back together.  Wish me luck!