Thursday Thirteen--Things I Did/Do For All the Wrong Reasons 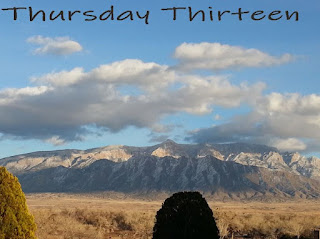 I was thinking yesterday, as I had my daily soak in the tub, about all the stuff I've done over the years that was for all the wrong reasons.  Let's face it, I was a blank slate.  I had no idea at all of who I was, and spent YEARS adopting various and sundry things because other people in my life thought I should or because I just didn't have a clue what I was supposed to be doing.  This was not all bad, mind you, but most of them weren't ME.  Because I am not very good at being "me".  I'm going to be 60 this year, and I still struggle with this.  Maybe it's a touch of "imposter syndrome", like you're playing a part in your own life and it isn't really you, or maybe it's my neurodiverse brain, but I never quite feel I can answer the question "Who are you?".

So here's 13 things I tried on over the years, or things I did that I secretly hated, or things that I did for all the wrong reasons.  Don't get me wrong, there's plenty of things I've done that have brought great joy, but this was the topic on my mind.  This is a pretty heavily instrospect-y post so feel free to get out now, lol.

1.  Be a Hippie chick.  Ex really wanted one of these but somehow fell in love with me.  I adapted.  Off to Dead shows we went, wore tie-dye, and the like.  Some of the shows were fun, but I'm not that girl.  The woman he fell in love with (while we were married mind you), and later married, and who raised the daughter I gave birth to, WAS that girl.  It would have been better for all concerned if he had just realized that (or I had) and moved on before we uprooted our lives for the great white north.  Ah well.  Water under the bridge.  I'm glad they are together, and she did a bang up job raising my daughter.  Cheers to them both for that.

2.  Enjoy Hiking and Camping.  Ex again.  Always wanting to get out in the woods.  Oh, man, did we go and see some amazing places.  Mountains, the desert, the beach.  And always sleeping on the feckin' ground for the love of GOD.  I haven't camped since, and the next time I do, it will be in nice big RV with AC and heat and a stove.  I'm an indoor girl.

3.  Move to Texas.  I moved to Texas for a man.  Dumber than a box of hair I was.  Trust me, Abilene Texas is the ass end of Texas, and I bailed after about 6 months.  I did have a nifty job writing procedures for Boeing and did some of the first IM-ing over some DOD net or other, back in the dark pre-internet ages of 1986 or something.  Whoo.  I am not fond of Texas, Texans (except cuz and fam) and all that "big" nonsense.

4.  Be a Roller Queen.  I loved roller skating in junior high and wanted to learn how to do it like the ice skaters.  Dad decided this was the perfect idea, and pushed me to take lessons.  The family who owned the roller rink were big money rich, and they invited me along with their also junior high daughters to take lessons and tests in Mobile.  Mom let me go, and made me the cutest little skirt to go with my leotard.  Of course super-rich blond skinny girls had pro costumes and I felt like ..... nobody.  I never went back.

5.  Be a Soccer Player.  Another Dad idea.  Play sports in 9th grade, it'll be fun.  To the daughter who never left the library.  So I did, for a year.  I was OK, but nothing a big-chested girl (I was even then) hates more than running.  I played full-back.  A year was enough.

6.  Signed up for business school.  I find this hilarious, since I just finished my MBA.  It was the ultimate "I have no fucking idea what I want to do with my life" moment, when I signed up to go to Old Dominion College.  Long story short, never went, got married, became a nurse.

7.  Wear Makeup and Jewelry.  I have been a "tomboy" all my life.  I never wore makeup, I rarely wore jewelry.  I had a very co-dependent relationship with a former boss (she was the administrator of a skilled nursing facility and I was the Director of Nursing).  She would give me little digs (meant to be nice of course, bless your heart) about how I should wear makeup, and jewelry, and fancy clothes.  I was her personal project or something.  So very glad I left her and the job in the rear view and literally moved across the country.  That stuff is just not ME.  That much I know.

8.  Be thin.  I have tried to be thin most of my life because society tells me I should be, and my mother with the eating disorder tells me I should be.  I've ruined my metabolism, had surgery, taken shots, pills, and all sorts of things, and I have spent very little time being thin.  Interestingly, none of the men in my life ever had a problem with my weight.  Interesting thought, that.  I'm done with the whole thing.

9.  Enjoy exercise.  The whole world shouts this from the rooftops "exercise is FUN!"  "exercise is good for you" (yeah, duh, I know that), blah, blah, blah, etc. ad nauseum.  I get out there every other day and walk as much as I can because it's good for Maddie.  Not because I want to be there.  And it's not fun.  I try to enjoy it, but I'd rather be reading or watching something or even working.

10.   Have a creative hobby.  I am not creative in the traditional sense.  I spent a lot of years telling myself I had to be creative at something, and tried to get into candlemaking, soapmaking, playing an instrument, and a whole laundry list of things that I ultimately just wasn't interested in.  Part of it was my OCD/perfectionism, but a lot of it was that it wasn't me.  My hobby is the pursuit and collection of knowledge.  THAT's what I love.  And cooking, which I just rediscovered a passion for in the last year or so.

11.  Got the wrong Masters.  I sincerely wish in retrospect that I had NOT listened to my Mom on this one.  Oh, I would have definitely gotten a Master's in Nursing, but not in Education.  My Mom suggested this as a "plan B" should I ever want to do something different.  I really wish I'd pursued researching the MSN in Informatics a LOT more.  The math and data analytics scared me.  I was afraid I'd fail (this is also pre-OCD meds).  Turns out it would have been a GIANT help with this job, much more so than the MBA probably.  C'est La Vie, split milk and all that.  At this point, I think it would be insane to pursue yet another Master's degree, so I'll learn what I can on my own, lol.

12.   Married the first ex.  This was just plain stupid.  I was 18, 9 months out of high school, and Dad packed us off to Louisiana on yet another job.  HE decided that I was going to LSU, and not Old Dominion where I was already registered, had a dorm room, the works.  I was so pissed.  I don't think I've ever been so pissed off about something in my life.  Not to mention leaving my high school sweetheart (who was the first ex, natch).  Anyway, Dad and I fought like cats and dogs and I made everyone's life miserable.  Mom literally gave me money and her little car and said wished me well.  Away I went.  3 years later we divorced, and I moved back home (they were in Georgia by this time).  Hot tip--don't marry your high school sweetheart out of spite at your Dad.  Bad idea.

13.  Continue to try to stay in touch with work "friends" from a job I'm no longer at.  This one is fraught.  I was very close with my two assistants from my last job.  We lunched, we did spa days together, but at the end of the day, our convo was mostly about work and work stuff.  When I left that job 4 years ago, we tried like hell to stay in touch, and get together, but everyone is now on different schedules and lives are more complicated as their kids have grown up, etc.  One of them literally lives 1/2 a mile from me.  We planned our usual Christmas lunch, I bought presents, etc, and then at the last minute, feeling like crap from the low sodium issue, I bailed.  So I have presents in my closet, for 2 people I haven't seen in MONTHS, or barely talked to, out of obligation for things that once were.  I don't know what to do with this friendship.  One of the women is so far out of my life, and the other, who I've more kept in touch with, is married to a scary AF three-percenter.  I don't know if I should continue to try to keep this friendship alive, or just call it a day.

Wow.  That was a heavy Thursday 13, but damn it felt good to write.  Introspection can be cathartic, and healing.