I love this song.  In 2000, I was working as a circulating nurse in an operating room in Santa Fe.  One of the surgeons brought in this CD and as the only non-sterile person in the room, it fell to me to play DJ.  Yes, music is listened to when surgery is going on (never until the patient is under anesthesia), every OR I've ever worked in had a CD player in the wall.  Surgeons pick all kinds of things....some classical, rock, even heavy metal.  Whatever works.  Anyhow, this one, we all sang along to.   How can you not?! 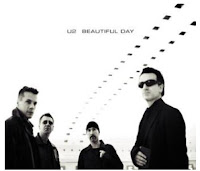 
Unfamiliar with this week’s song? Hear it here.

1) This song is about finding joy in an imperfect world. What brings you joy today?

Taking off a couple of hours early to do some blogging and self-care.  This weekend will be busy (as payday weekends always are it seems) so I am giving myself permission to just relax for a couple of hours.

2) The lyrics mention being stuck in traffic. A poll of Boston commuters revealed that drivers have a variety of responses to be stuck in traffic — everything from bored to impatient to angry. How do you feel when you’re stuck in a traffic jam?

Antsy.  I just want to get where I’m going.  Thankfully, I don’t have to commute anymore!

3) This year Bono and his wife, Ali, celebrate their 40th wedding anniversary. Who is the longest-married couple you know?

My brother and his wife.  They’ve been married for around 30 years now.

4) When Bono inducted Frank Sinatra into the Grammy Hall of Fame, he complimented Frank on his “swagger.” Do you think you have “swagger?”

I have anti-swagger.  I prefer to sort of move through life without being noticed too much.

5) When U2 guitarist The Edge did a charity concert at the Sistine Chapel, he became the first rocker to perform there. If you were to travel to Rome, what sites would you be certain to visit?

6) This week’s song was chosen because St. Patrick’s Day is coming up, and U2 is one of Ireland’s most famous exports. What else is Ireland famous for?

7) Corned beef and cabbage is a traditional St. Patrick’s Day dish. Is it a favorite of yours?

Love it.  Just made it last night, in fact.  Although we had the New England version, which includes carrots and potatoes.  I serve it with a sauce made from Duke’s mayonnaise, whole-grain mustard, and horseradish sauce.  Yum!

8) St. Patrick is credited with driving snakes out of Ireland. Ophiophobia is the fear of snakes. Do you suffer from ophiophobia?

I’m only afraid of the poisonous ones.  I find the boas and pythons kind of interesting.

9) St. Patrick’s Day fantasy: A leprechaun will share his gold with you, but you must request a specific amount for a single item. How much would you ask for, and what would you buy?

Whatever the payoff on my house is.  Owning this house outright and never having to make another mortgage payment would be lovely.