Saturday 9--Get on Your Feet 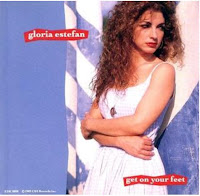 1) In this song, Gloria Estefan encourages us to stand up and make it happen. What's something you want to accomplish this fine Saturday?

Doing a little more side gig work, making an amazing dinner (Drunken Clams with Ramen), and some blogging.  Super happy with the side gig, they’ve asked me to train in another module—I’m up to four now, and the more modules that I’m trained in, the more opportunities for extra work I have.  I can work up to 20 hours a week--right now I do 10, which is perfect, but sometimes the work runs out towards the end of the month.  Hopefully, this will allow me to work a steady 40 hours a month above my full time job.  My savings account is VERY happy!

2) She sings that we've all been through some nasty weather. How has winter 2021/22 treated you thus far (weather wise)?

It’s been relatively mild here in New Mexico.  Not as much snow as in past years, which is bad, because snowpack is part of our precipitation (a whopping 8 inches a year).

3) Best known as a recording artist, Gloria is also a best-selling author of children's books. When you were a kid, were you a big reader?

Huge.  I always had my nose in a book, even on the playground.  I preferred books to other kids—always being the new kid was hard, and books never let me down.

4) In addition to music and writing, she's a linguist. As a college student, she supported herself as an English/French/Spanish translator at Miami International Airport. When were you most recently at an airport? Were you traveling yourself, or picking someone up/dropping them off?

The last time I flew home to South Carolina to move Mom out here to New Mexico.

5) Gloria made her acting debut in 1999's Music of the Heart, a Meryl Streep movie about music teachers in Harlem. Did you have music classes in school? Have you ever taken private lessons?

The usual school music classes.  I’m not musically talented, so no lessons.

6) Today Gloria is one of the celebrity residents of Star Island, a man-made island in Biscayne Bay. Star Island is connected to the mainland by MacArthur Causeway, named for General Douglas MacArthur. Tell us about a street in your neighborhood, and who it's named for.

My section of this very large (3600 homes) neighborhood is The Pueblos.  All the streets are named for indigenous tribes here in New Mexico (specifically the Pueblo peoples).  We have streets like Cochiti, Zia, Zuni, Isleta, San Juan, and San Ildefonso.  All of the Pueblos were given Spanish names by the conquistadors, but most of them have reverted back to their traditional names in their own languages.  For example, San Juan Pueblo reverted to Ohkay Owingeh in 2005.

7) 1989, the year "Get on Your Feet" was popular, was the year of the first HDTV broadcast. By 1998, high-def shows and TVs were dominant. How many TVs are in your home? Do you watch shows on your computer or phone?

Just one big one (75”) in the living room.  Hubs watches stuff on his computer, but not me.

8) Also in 1989, The Simpsons premiered. It's now the longest-running prime-time TV show ever. Are you a fan?

Nope, not one little bit.

If they want.  None of mine ever did, because of their professions.  1st ex was a pipefitter, rings weren’t allowed.  2nd ex was a pastry chef, and it’s unsanitary to wear a ring whilst handling bread dough.  Current hubs worked in an aluminum manufacturing plant when we first married, again, not allowed.